Pousada do Porto – Freixo Palace Hotel is a Pousada de Portugal, Portugal’s most important hotel chain, with over 40 exclusive hotels located throughout the country (equivalent to Paradores, in Spain), managed by Group Pestana since 2003.

The Pousadas de Portugal had their origin in the 40's and have remained faithful to their essence, providing visitors with top service including traditional Portuguese cuisine, in prime location historic restored monuments, located in castles, monasteries, fortresses and places of natural beauty.

Pousada do Porto – Freixo Palace Hotel is the first of its kind in Oporto, the country’s second city, and currently the third largest of the chain.

The Pousada do Porto is a five star hotel with 87 rooms, Portuguese fine cuisine restaurant, exterior areas and five meetings for meetings and events, bar and coffee-shop, exterior pool overlooking the Douro river and SPA with interior pool, sauna and Turkish bath.

Out of the 87 rooms, where areas vary between 26m2 and 70m2, 10 are suites with amazing terraces over the Douro Rver, four of which are communicating rooms for disabled guests. All rooms are fully equipped with air conditioning, television, cable tv, mini bar, hair dryer, safe deposit box, Wireless Internet connection.

The Pousada do Porto - Freixo Palace Hotel project’s originality resides in the unique contemporary combination of a historic eighteenth century palace, and its gardens, with an industrial building, set in the natural magnificent Douro river bank scenario, transformed into a five star exceptional hotel. The once home of important clergy and noble men of Oporto Freixo Palace and national monument has been restored to all its dignity and is undoubtedly one of Portugal’s most beautiful hotels.

The project includes full external and internal recovery of the palace, thoroughly carried out by architect, interior designer architect, engineers’ team and restorers’ team, who also transformed the industrial building keeping but the façade and structure that lodges the 87 modern and comfortable rooms overlooking the Douro river. The internal design project includes a daring combination of 90 unique museum pieces lent by local Oporto museums with modern design. The Versailles style gardens and the river deck were fully restored as well and outdoor pool and supporting facilities have been added to the external area in full respect with the landscape’s features and historic evolution of the property.

In the old factory building the interior was totally voided, but the internal metallic original cage was restored and adapted to the new complex lodging structure to house all types of rooms. In the Palace, the integration of public lift into the eighteenth century structure and the tailor made electrical remote control system that allowed avoiding usage of cables are remarkable achievements. Exterior, full recovery of industrial chimney and river dock (used to receive and dispatch merchandise), now adapted to a modern river deck lounge.

The use of local municipality public domestic recycled waters to water the gardens is a key accomplishment in resource conservation. The project includes many other important energy efficient infrastructures and characteristics such as, in the old factory building: solar panels supply heating for sanitary waters for the whole complex. Thermally isolated walls, double framing in windows, usage of low consumption lamps, rooms’ cards turn electricity on & off prevent energy waste, among many others.

♦ Facilities for people with disabilities 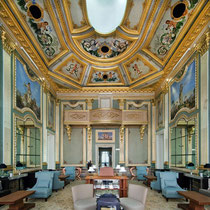 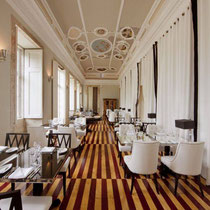 Porto is the origin of Portugal’s name. Porto is one of the oldest Portuguese cities, and is also known as “Cidade Invicta”, because it has never been defeated in battle by invading forces. The Historic Centre of Porto was declared a World Heritage in 1996. In 2012 and 2014, Porto was distinguished as the Best European Destination. The city is known worldwide for its Port Wine, and for its old and contemporary architecture, and for the five bridges that define the historical epochs of the city. Next to the river and to the sea, Porto is a city of contrasts in which medieval arcades coexist with buildings such as the “Casa de Música”. It is a captivating city, the character and the hospitality of its inhabitants invite one to visit it again and again.